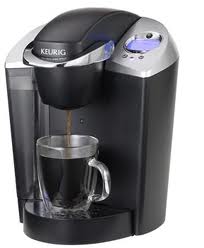 Leading up to the holidays, I noted that just about every store in my area had Keurig machines available for purchase.  Not just a couple, but damn near all of them, or so it seemed.  Sure the big-boxes had them, but also fashion-department stores, electronics stores, even home improvement centers had rows of coffee machines and stacks of small “kup” boxes.  It seems that the Koffee juggernaut had staged a world-wide conquest.  And if the picked over shelves were any indication, the blitzkrieg had been successful.  I decided that it was time to learn more about these machines, as they now seem to be firmly entrenched in homes across the globe.

I have in recent months (now years) made fun of the Keurig coffee machine.  When I first looked at one, I immediately thought back to my very first career job, working in a place that had a coffee vending machine.  You may know what I’m talking about: a big, refrigerator-like device that had an itty bitty little door that would put on a show for 25 cents.  After eating your quarter a little paper cup would drop down and a stream of hot brown liquid would pour in.   This brown liquid was a mix of “brewed” coffee with a dusting of some instant flavor and coloring.  A healthy hit of powered creamer and sugar got this close to drinkable.  Close.  NOT drinkable.  I unfortunately associated this sad performance with the counter top Keurig.

The old coffee machine of the bad old days.

Giving the Keurig a break.

While the Keurig could be accused of putting on a similar show, it is not fair to lump the K-machine into the same catagory of those old change-stealing machines.  For starters, the brewing technology is rather interesting.  Unlike that old refrigerator that tried to make coffee, Keurig says there is no “instant” flavorings or other accelerants to make up for a very brief brew time.  They’ve also made a brewing system that at the heart of things is very clean, very convenient and attractive on the countertop.  You’re always about 45 seconds away from a Keurig brewed cup, and that alone is reason for looking into this device.

And look into I will.  I turned a thoughtful but mis-sized clothing gift into a “Special Edition” Keurig, and I’ve been testing it since Christmas.  I will have a running report on the system, it’s ups and downs, and what I think of the available coffees for the system.