Do It Yourself K-Cup: Keurig’s Solution

The idea is to save money.  Save the planet as well, a tiny little K-cup at a time.
I have always said the greatest thing about the Keurig is how darned convenient it is … pop in a cup, press a button and pop the used cup out.  Factoring in the clean up process there is no other form of coffee making that’s easier than this.  But the cost of that bit of convenience is rather high … about 21 dollars a pound of coffee, by my estimate.  How can you use the cheap stuff in your Keurig so it doesn’t cost you a fortune in little cups?  You use an aftermarket reusable cup, that’s how. 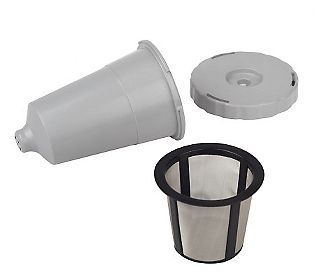 There are several different brands out there, each taking a slightly different approach to the “no deposit, no return” goal we seek.  Keurig has their own, called “My K-Cup.”  The “My K-Cup” is the most elaborate of any of the reusable solutions I’ve seen, not only having a rewashable mesh basket but an entire holster that replaces the regular black one that comes with the coffee machine.  The black one has the puncture needle in the bottom, and since the mesh basket has no need for this the gray colored “MyKC” omits this and simply funnels the coffee down into your cup.  So, or a holster, a mesh screen coffee basket and a screw on top, you will part with about 17 dollars at Amazon.  Not great, but not really that bad if you can go from 67 cents a cup of coffee to say … 35 cents.  The device would pay for itself in a single change of seasons.

But what sort of coffee does it make?

You have to practice with it.
Oh, sure … there’s little black markings inside the little black cup to help you get the right amount of coffee.  That is, if you can see the little black markings.  But the first set of brews were not all that good, a little off.  But with more practice and patience I was able to get it to a state of … just okay.  I got it to qualify as perfectly acceptable, drinking while doing other things coffee.  Not great, stop in your tracks and thank the coffee gods -coffee.  But that’s okay.  If you want heart stopping, bring tears of joy to your eyes coffee, you’d have a 750 dollar Rancillo Silvia on the counter, not a Keurig.  But there is some work ahead of you to get the most from this device.

I used some pretty good coffee to start with.  I got a bag of Peet’s Decaf Major Dickenson’s, which is a darker roast that should hold up nicely to the Keurig’s short brewing time.  I find that lighter coffees suffer with the K- treatment, the water just isn’t in contact with the grounds long enough to extract the lighter flavors.  Darker does better, and the Maj. D. did just fine.  I used pre-ground, as this is pretty close to perfect for drip (what the Keurig calls for) and the particles are pretty uniform in size.  If you grind your own, beware of the blade type grinder, as they chop the beans up and have very irregular size.  If you don’t have a burr type grinder (more expensive but worth it) just buy it pre-ground and keep the bag sealed to air whenever it is stored. 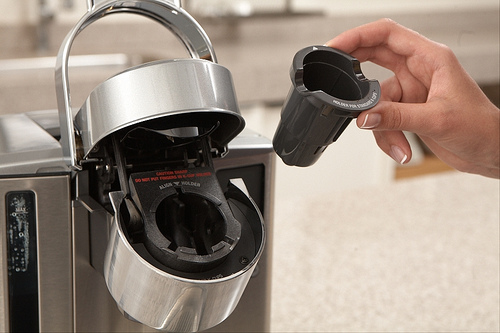 I found a few quirks with the MyKC design.  First, you do have to swap holsters whenever you want to roll your own.  Not a big deal at all, but I’ve already gotten frustrated calls from home when I forgot to put the original holster back in and a family member couldn’t get her regular cup to work in the machine.  Loading the coffee in the mesh bag was a challenge because you need three hands:  the basket/holster won’t stand up on the counter due to the holster’s tapered bottom.  If you have holster in one hand, coffee spoon in the other, then you need to hope your bag of ground coffee won’t fall over while you’re spooning out the dose.  I found a way around this:  I stand up the mesh basket/holster assembly in a demitasse cup while I hold the spoon and bag in my now-free hands.  The lid screws on easily, but you are warned not to over tighten …. the plastic might break.

Actually brewing with the MyKC is no different than any other K-Cup device.  The brew runs out the bottom and a shot of steam/air clears the upper piercing needle.  I noted that the flow of coffee seems faster and greater than with a regular plastic cup.  I wonder if the additional time the water is in contact with the grounds gives the standard cup an advantage, allowing a little more extraction and a fuller flavor.  I found that a full basket/large mug setting got me a decent flavor and boldness.  I think that running a small mug would make it quite strong … maybe to some folks taste, but if I want strong I’d rather use an espresso.

Cleaning is simple, but I recommend doing it immediately after brewing.  Just pop out the assembly, pop open the top under running water and rinse out the basket.  You don’t want the grounds to dry to any degree, as they will “set” in the basket and turn to a hard crumbly substance.  This makes for a clean up thats at least twice as long and will mean lots of coffee grounds under your fingernails.  Just do it when it is wet, and it will flush clean with just holding it under the tap.

All the parts are machine washable, and I’d recommend that after a few days.  The coffee oils do cling and begin to discolor the plastic.  Keeping parts like this perfectly clean is important for flavor, so make a point to run them through with the dishes when you think of it. 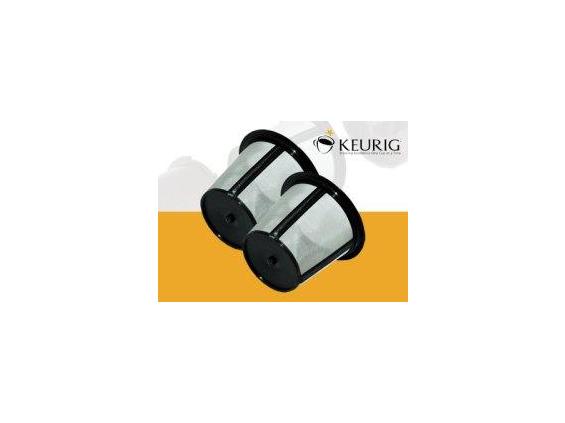 All in all, My K-Cup is a good add on for the Keurig.  Points off for the additional hassle of having to change cup holsters and NOT being able to stand the holster up while filling with ground coffee.  Points on for a well built and easily cleaned mesh basket that looks tough enough to last a good long time.  Keurig also sells extra baskets so you can reload for guests with a minimum of rinsing and drying.

There are other choices in the “roll your own” category of K-Cup replacements.   We will look at another popular choice, the eko-brew, in the coming days.

This entry was posted in Uncategorized and tagged coffee, ekobrew, K-cups, Keurig, My K-cup, reusable K-Cup. Bookmark the permalink.

2 responses to “Do It Yourself K-Cup: Keurig’s Solution”