Sam Glazer, The Man Who Made America Safe For Coffee, dies.

Prior to 1972, America boiled their coffee. 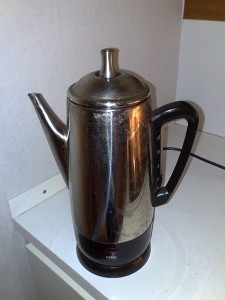 The instrument of this torture was the percolator coffee pot, that would boil water, force it up into a basket of grounds and drip it back down into the caudron below.  Yes, by the end of the process you had heated brewed coffee to the boiling point and redripped it several times.  This made for a powerful tasting (note here that powerful did not mean “good”) cup of joe that would grow hair on your chest.  This ain’t the stuff folks stand in line for at Starbucks. 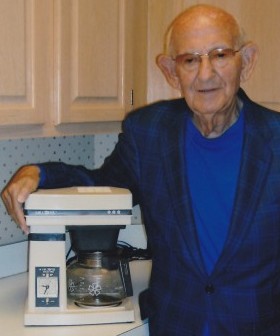 Then came a man named Sam Glazer.  He made a little coffee maker out of plastic and paper filters.  And he called it “Mr. Coffee.”  And the clouds parted.  And the people gave shouts of great gladness.   No longer would they have to drink 40 weight motor oil sprinkled with non-dairy creamer.  They would have a brew that was lighter, brighter and just plain good for the soul.  His coffee machine was a big hit, selling millions of units in a short period of time.  The addition of sports spokesperson Joe DiMaggio on television commercials made the Mr. Coffee machine a home and television icon of the 1970’s and beyond.

Everyone remember “Mr. Fusion” from 1985’s “Back The Future?”  Well, without Sam Glazer’s contribution to pop culture, Marty McFly’s DeLauren would have been running on percolated coffee.  Wow.

The folks at NPR.org has posted an interview about Mr. Glazer, and how America rose out of the dark ages for coffee.  It’s a nice, compact read … I recommend it:   Follow here for the article.

Mr. Coffee commercial with Joe Maggio  for all who wish to see a blast from the past.